How Ultraviolet Light Can Help Save Strawberries

Natalia Peres, a plant pathologist professor at University of Florida Institute of Food and Agricultural Sciences, is working with other scientists to create a machine that uses ultraviolet light to suppress plant diseases and pests at night.

Natalia Peres envisions a day when light from a machine resembling a spacecraft helps prevent powdery mildew from damaging strawberries.

Peres, a professor of plant pathology at the University of Florida Institute of Food and Agricultural Sciences, works with a global group of scientists studying how to use ultraviolet light to suppress plant pathogens, according to a news release. Powdery mildew is one such pathogen.

Peres and researchers at Rensselaer Polytechnic Institute and Cornell University — both in New York state — as well as scientists from Norway are pioneering the research, according to the release. ultraviolet lamps are widely used in water purification and microbiological sterilization, but they’re not yet commonly used for plant-pathogen suppression, according to a USDA news release announcing the grant for the research last year. 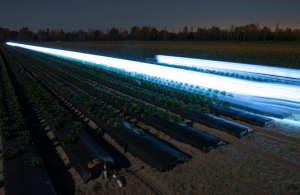 “UV treatments applied once or twice weekly were as effective as the best available fungicides applied on similar schedules for control of strawberry powdery mildew,” Peres said in the release. “It’s not a one-time fluke. The trials have been repeated successfully for three seasons now.”

The new technology has been tested at UF/IFAS Gulf Coast REC strawberry fields and at Wish Farms in Duette, Fla. Similar trials are being conducted across North America and Europe by research collaborators on crops such as grapes, hops, and cucumbers, Peres said in the release.

The research has been supported by grants from the USDA Specialty Crops Research Initiative, the USDA Organic Research, and Extension Initiative, the Norwegian Research Council and state and regional commodity groups.

UV-C Irradiation Helping to Save Strawberries

“The idea of using UV-C to control fungal diseases of strawberry fruit came from a conversation with [USDA-ARS lead scientist and research horticulturist] Dr. Fumiomi Takeda in late 2010 when he expressed concerns about limitations to the use of fungicides and needs for alternative control methods,” explains Dr. Wojciech Janisiewicz, a research plant pathologist at the ARS’s Appalachian Fruit Research Station in Kearneysville, WV.

such as high tunnels is limited or prohibited, and a rapidly growing organic market demands fruit free of synthetic pesticide residues.”

UV-C irradiation works by damaging microorganisms’ DNA, eventually killing them. Unfortunately, the process isn’t as simple as blasting the plants with UV-C irradiation and calling it a day. Janisiewicz says the microorganisms have a special light-activated mechanism that allows them to repair the damaged DNA. To disable the ability to heal themselves, the microbes on the strawberry plant must endure a two-to-four hour dark period after the UV-C exposure.

Several USDA-ARS-led experiments proved this treatment combo was effective against gray mold, black spot, and powdery mildew [see figures]. The research team was excited about the results, but they began to question whether the strawberry plants experienced any negative effects from the treatments. How would the process impact pollen viability, fruit set, and other important plant characteristics?

The team was also able to prove that postharvest irradiation and dark treatment could be effective against pathogens on fruit that was cut or scratched during harvest or storage. Armed with this information, the researchers at USDA-ARS set out to bring the technology to growers.

The prototype can straddle over four raised beds in a high tunnel, and it has reflective surfaces on the sides. By adding reflective mulch to the raised beds between the strawberry plants, the device can deliver UV-C rays to the underside of the plant leaves to prevent powdery mildew from forming there. According to Janisiewicz, the apparatus irradiates the strawberries for up to 60 seconds twice per week. This is done at night to ensure a proper dark period following the treatment. 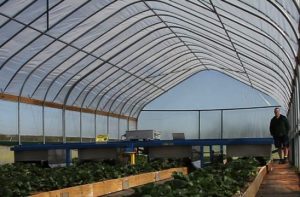 For strawberries grown on tabletops in the greenhouse and other indoor growing systems, the team sought a different solution.

“We developed a multi-directional UV-C treatment apparatus that will eventually be mounted on already existing transportation lines used for sprayers and harvesting aids,” Janisiewicz says, explaining that this led to the creation of PhylloLux technology, a combination of UV-C/dark treatment and beneficial microbes isolated from the fruits that efficiently colonize the strawberry plant surfaces. 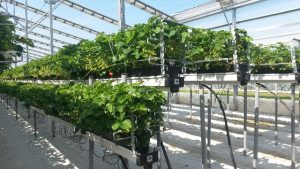 “The application of the beneficial microorganisms fills in the microbiological vacuum created after UV-C/dark treatment sterilization, and at the same time, provides an additional measure to control the diseases.”

This prototype is being used in pilot tests of table-top grown strawberries in commercial greenhouses and high tunnels. The studies have certainly proved promising, but there’s still more to learn about this novel treatment option.