The Science Behind UV-C Energy

What is Ultraviolet C?

The entire UV spectrum can kill or inactivate many microorganism species, preventing them from replicating. UVC energy at 253.7 nanometers provides the most germicidal effect. The application of UVC energy to inactivate microorganisms is also known as Germicidal Irradiation or UVGI.

UVC exposure inactivates microbial organisms such as bacteria and virusesby altering the structure and the molecular bonds of their DNA(Deoxyribonucleic acid). DNA is a “blue print” these organisms use to develop, function and reproduce. By destroying the organism’s ability to reproduce, it becomes harmless since it cannot colonize. After UVC exposure, the organism dies off leaving no offspring, and the population of the microorganism diminishes rapidly.

Ultraviolet germicidal lamps provide a much more powerful and concentrated effect of ultraviolet energy than can be found naturally. Germicidal UV provides a highly effective method of destroying microorganisms.

What is UV Energy?

Most of us are familiar with the harmful effects of UV energy transmitted by sunlight in the UV-A and UV-B wavelengths, giving rise to UV “sunburn” inhibitors, or blocking agents, which are found in glasses and lotions. We are also familiar with products engineered to withstand the effects of UV radiation, such as plastics, paints, and rubbers. However, unlike the UV-A and UV-B wavelengths, the UV-C band has more than twice the electron volt energy (eV) as UV-A, and it is well absorbed (not reflected) by organic substances, adding to its destructiveness.

UV-C’s germicidal or germ killing effects are well proven. The UV-C wavelength owes these destructive effects to the biocidal features of ionizing radiation, or more simply, UV-C does far more damage to molecules in biological systems than can temperature alone. Sunburn, compared to the sensation of warmth, is one example of that damage. Sunburn is caused by sunlight striking and killing living cells in the epidermis; the resulting redness from a sunburn reflects the increased capillary action and blood flow that allow white blood cells to remove the dead cells.

It is this ionization function that drives UV-C’s power to alter chemical bonds. The 254 nm wavelength carries enough energy to excite doubly-bonded molecules into a permanent chemical rearrangement, causing lasting damage to DNA, ultimately killing the cell. Even a very brief exposure to UV-C can permanently eliminate microbial replication. In other words, UV-C exposure kills bacteria and other infection-causing microbial (and efficiency-robbing) organic contaminants. After being killed, organic remnants are subject to disintegration.

Is UV-C Safe for Humans? 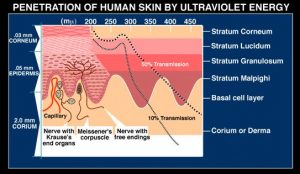 In UVGI systems the lamps are shielded or are in environments that limit exposure, such as a closed water tank or closed air circulation system, often with interlocks that automatically shut off the UV lamps if the system is opened for access by humans.

For human beings, skin exposure to germicidal wavelengths of UV light can produce rapid sunburn and skin cancer. Exposure of the eyes to this UV radiation can produce extremely painful inflammation of the cornea and temporary or permanent , up to and including blindness in some cases. UV can damage the retina of the eye.

Another potential danger is the UV production of ozone, which can be harmful to health. The US Environmental Protection Agency designated 0.05 parts per million (ppm) of ozone to be a safe level. Lamps designed to release UVC and higher frequencies are doped so that any UV light below 254 nm wavelengths will not be released, to minimize ozone production. A full-spectrum lamp will release all UV wavelengths, and will produce ozone when UVC hits oxygen (O2) molecules.

UV-C radiation is able to break down chemical bonds. This leads to rapid aging of plastics, insulation, gaskets, and other materials. Note that plastics sold to be “UV-resistant” are tested only for UV-B, as UV-C doesn’t normally reach the surface of the Earth. When UV is used near plastic, rubber, or insulation, care should be taken to shield these items; metal tape or aluminum foil will suffice.

The American Conference of Governmental Industrial Hygienists (ACGIH) Committee on Physical Agents has established a TLV for UV-C exposure to avoid such skin and eye injuries among those most susceptible. For 254 nm UV, this TLV is 6 mJ/cm² over an eight-hour period. The TLV function differs by wavelengths because of variable energy and potential for cell damage. This TLV is supported by the International Commission on Non-Ionizing Radiation Protection and is used in setting lamp safety standards by the Illuminating Engineering Society of North America. When TUSS was planned, and until quite recently, this TLV was interpreted as if eye exposure in rooms was continuous over eight hours and at the highest eye-level irradiance found in the room. In those highly unlikely conditions, a 6.0 mJ/cm² dose is reached under the ACGIH TLV after just eight hours of continuous exposure to an irradiance of 0.2 μW/cm². Thus, 0.2 μW/cm² was widely interpreted as the upper permissible limit of irradiance at eye height.